“Running has thrown me into adventures that I would otherwise have missed.” Benjamin Cheever

With only a few hours to go until crossing the starting line of my very first marathon, mentally my knees are jitterbugging, while physically they are itchy, strong and eager to run.

But before I embark on this very last part of the journey towards October 13th 2013, I am looking back at my rather crazy and slightly unusual training experience – for a first-time marathoner most certainly. In my last entry I talked about all the different places I saw while running this year in Chicago and all over Australia and Bali. But the majority of my running and all of those very long 13-mile, 15-mile, 18-mile, 20-mile runs I did in the Daly River area. Let me tell you about that. 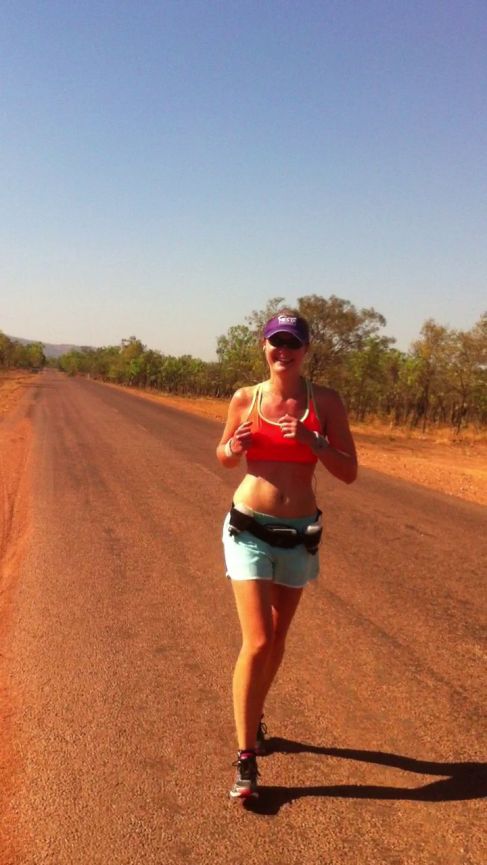 The Daly River is a mighty river up in northern Australia about 250km from Darwin and in a scarcely populated area. To run here is to be on your own. Almost nobody else embarks on the quest of running in this unforgiving climate and harsh environment. Twice, in five months, I met other runners – one of which was a tourist. So this is what I had to do to ‘survive’:

Because of the heat, I had to do my long runs early in the morning which is not at all different from any other runner’s experience. However, because of the sometimes scary wildlife and lack of streetlights, I could only go once the sun was up. So a typical Sunday for me meant to get up at around 5:15am, small breakfast, running gear and then into the car armed with a few handfuls of water bottles and energy gels. Then I would drive down my planned running route (which was always the same, differing only in distance) and deposit water, sports drinks and gels along the route. All tagged with a friendly note to ‘Please leave for crazy running lady.’ Did I mention very few people live there? Yes, so everybody knew who that referred to. 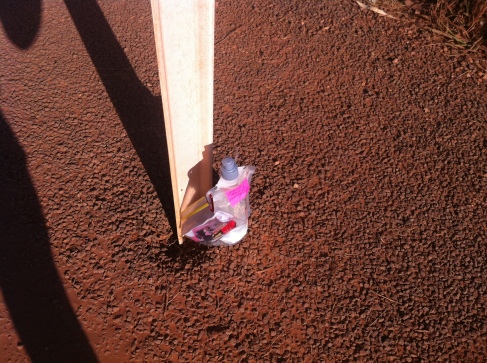 Then I would drive back and start my run confident that I had scared most dangerous wildlife off the road while driving along it – at least for the first few miles. However, I did not complete a single long run without encountering any cute, large, small or potentially dangerous being.

A constant was a little wallaby that lived about a mile up the road and that hopped off into the bushes at first sight when I started running in the Daly in May and just lazily blinked at me from 3 feet away when I swished past by September.

There was also a large Jabiru (a massive stork-like bird) that liked to hang out at mile two and was mostly just annoyed by me disturbing it. Speaking of birds, one of the cutest things I ever came across was a tiny baby curlew (a nocturnal bird with a very characteristic shrill call) that decided to throw a temper tantrum in the middle of the road by refusing to go any further with its parents. It clearly had never seen a human before me and was entirely oblivious of the dangers of the road or me. So I slowly came closer calling out, nothing. I gently tried to push it sideways, nothing. Finally, I decided to very carefully maneuver it to the side of the road where I had seen its parents disappear to. It was not happy with my move at all and protested loudly. But when I returned to the same spot about half an hour later they were all gone and no car accident had claimed the little bugger.

Less joyous were other creature encounters. I named this blog ‘running from buffalo’ and running I did from them. They were almost always around when I went running, grazing on the side of the road and thankfully usually only eying me suspiciously and trotting off into the bush when I came closer. But if it hadn’t been for my bright running gear and fearless disposition when running (it really just is bad running style, I fear), they were clearly capable of more threatening moves.

However, real danger and one that let my heart sink way into my running shorts were packs of wild dogs. On one particularly scary occasion, a pack of five Rottweiler-sized beasts decided to check out what in the name of god I was doing running. I had seen one large black animal way up ahead the road and first thought it was a buffalo calf. But when I got closer I saw it was a dog looking at me intently. Before I could decide what do to, it turned around and trotted into the bushes. My heart pounding I cautiously ran past on the very far side of the road. Then I saw some bushes moving, heard a rustle, quickened my pace and heartbeat. Just when I had passed the spot where the black hound had disappeared, out they came; five large dogs, heading in my direction. I knew I couldn’t outrun them, of course. I had my phone with me and there was a slight chance of catching reception where I was at the time but even then it would have been at least 10 min until anyone could have been here to my rescue. Not enough time. There were no houses around to run into for help either. So all I could do was to turn around boldly, blow up my chest and arms and start yelling abuses at the top of my lungs. I do not recall what I yelled, but I think it was a mix of German and English swearwords aimed to sound as threatening as possible.

And to my utter surprise it worked. They first slowed down. Yell! Then they started jogging again, yell yell! Slow. Yell! Stop. Yell! Turn around. Yell! Trot off. Heart in hand. And so much relief.

After that, I counted to the days until I could return to Chicago to run where only Canada Geese or other runners could get in my way – neither of which (normally) as frightening as this pack of dogs.

With all its ups and downs, its devastating humidity and heat, its solitude and monotony, the Daly River has taught me a lot about the art of running. Endurance goes beyond running the distance. It goes into the heart of your surroundings and everything and everyone in it. It’s an adventure.