The National Geographic Magazine recently published a great article on the “mind-bending ways to navigate” in the Yupno language spoken in Papua New Guinea. The Yupno use an environmental-based system talking about “uphill/downhill” and “upvalley/downvalley” slopes where we might use “east /west/south/north”. Additionally, they create a metaphorical topography inside their homes that is distinct from the real-world landscape. Within a traditional house speakers map a prominent river of their home country onto a central fireplace that runs down the length of the living room area and project the sloped directions from there. As a result, “uphill” is always away from the door regardless of the actual direction with regards to the prominent mountain range.

The languages of the world have many astounding and staggering ways to describe the space around us. They are as diverse as the landscapes we humans have conquered and occupied. As a linguist working on Australian languages I have long been fascinated by the ways indigenous Australians talk about their surroundings and what that may be able to teach us about Aboriginal culture, cognition and even grammar. Today, I’d like to share what I’ve learned so far.

Take a look at this picture. What would you say if I asked you “Where’s Doro?” 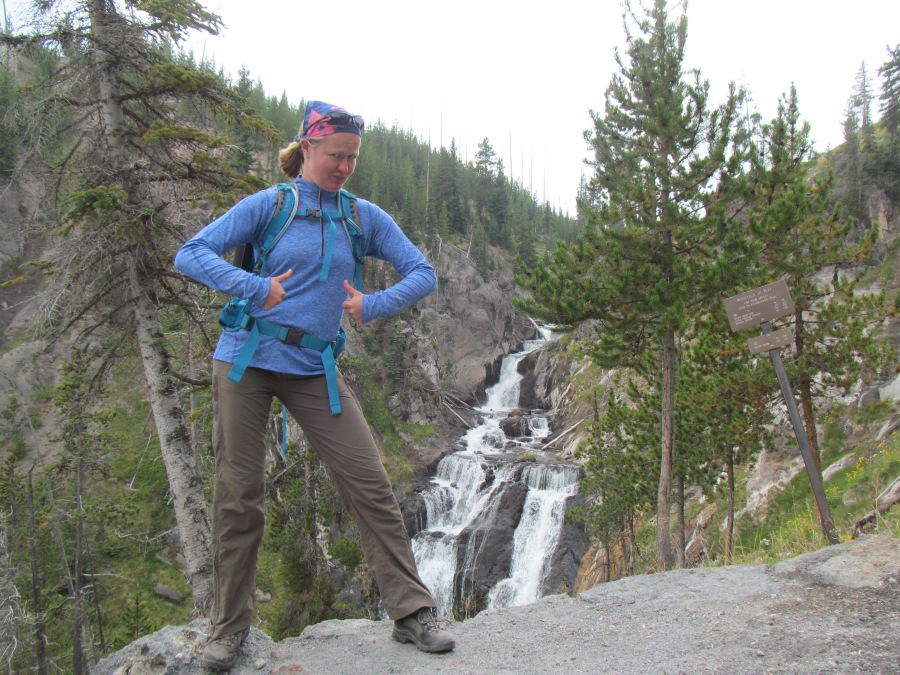 I bet it would be a variation of one of these:

c. Doro has the waterfall on her left side

d. Doro is east of the waterfall

There are technical terms for how these relations can be described. The first (1a), is a type of topological relation where Doro (the figure) is located somewhat in relation to the waterfall (ground), but they are not touching. This would be different, for example, if Doro were, say, ON TOP OF or WITHIN the waterfall. (Yes, let your imagination run wild here with possible hilarious scenarios). These would still be topological relations, but of a different (touching and containment) type.

(1b) is a relative Frame of Reference. This one is very familiar to any English speaker. It is also a very complicated one and familiar to anyone who struggles pointing out directions on the fly:

This relationship is threefold – it describes the relation between Doro (the figure), the waterfall (the ground) and yourself. Since you are using your very own perspective while looking at the picture. Think about how when you stand in front of a group of people pointing out something on the left, you have to switch your mind around to match your audiences’ perspective to the right.

(1c) is what we call an intrinsic Frame of Reference. Again, this is something you are probably all familiar with. In fact, this way of thinking about spatial relations appears to be pretty much universal among the world’s languages and peoples. It uses Doro’s (the ground’s) inherent or intrinsic features (her front/back, left/right) to describe the location of the waterfall (the figure). This is again a two-fold relation since you do not need a third angle (as in the relative frame example where you use your own) to describe what is going on.

Finally, (1d) is the absolute Frame of Reference. It uses cardinal directionals to describe the location of entities. You might be most familiar with these for thinking about giving directions or when talking about large-scale locations.

Unless you are European and live in a city where streets grew organically and are not grid-organized. I can tell you one or two stories about my befuddlement when I first arrived in the US and had to learn general directions and orientation of endless north-south and east-west streets to find my way around… However, for example,

“Head south on Broadway to Fullerton. Then turn east and wait until you see the entrance to Lincoln Park Zoo on your right.”

sounds perfectly normal and is easy to follow for any Chicagoan. Using these cardinals in an example such as (1d), on the other hand, is a less likely scenario for you. It is possible, but not many people choose to use it in English. This relationship consists of three participants and is tertiary like the relative frame. This time you place Doro (the figure) in relation to the waterfall (the ground) by invoking a third entity – the abstract direction of cardinal east.

So, where is Doro in Australia?

These types of descriptions appear fairly complete and you might expect most people to allow these or similar answers to the question “Where is Doro?”. Well, surprise!, this is not quite the case.

Let’s see what some likely replies would be in Australian languages:

b. Doro is facing downstream, (the waterfall is behind her) (Jaminjung)

c. Doro is looking into the northwesterly wind (the waterfall is behind her) (MalakMalak)

d. Doro is on the ocean-side of the waterfall (Iwaidja)

e. Doro is looking against the tide (the waterfall is behind her) (Bardi)

f. Doro is over there. On that side. (Murrinh-Patha)

Interestingly, examples (2a-2e) are all absolute directionals of the same or similar kind as the one in (1d). But then again, not really. What’s going on?

In Guugu Yimithirr spoken in Hopevale, Queensland, at first glance, the familiar four-way cardinal system is being used. However, instead of referring to a point on the horizon (where the sun sets/rises/is highest in the sky etc.), speakers assume four quadrants. Very much like a cake cut into four pieces, where there is, for example a northernmost piece, and where everything within this piece receives the label ‘north’. The system is also rotated somewhat clockwise from the standard Western structure and people have wondered whether it not really reflects the line of the coast, prevailing winds or seasonal changes in the arc of the sun instead of the rising and setting sun per se.

Example (2b) is what a Jaminjung person might answer in reply to the question. This language is spoken in the Victoria River area of the Northern Territory. The upstream/downstream system is based on the course of the Victoria River primarily, but can also be projected onto any salient smaller waterway, such as the creek behind Doro and the waterfall. Interestingly, in Jaminjung you cannot say “Doro is downstream of the waterfall”. You could say “Doro is upstream (of me)” implying your own location as the reference point (this is called deixis). Or you can orient Doro with regards to the downstream direction as in (2b).

This scenario is somewhat similar to what you see in (2c) from MalakMalak, the language of the Daly River area, the place where the big barramundi can be caught. The MalakMalak employ a system that is based on the direction of two prevailing winds. During the wet season (December to March) a soft, hot and humid wind blows in from the northwest, called nul. In the dry season between May and July, a strong, cool, dry wind named dangid often moves in from the southeast. These are only ever used to orient Doro as in (2c) or show her in motion. You cannot say “*Doro is northwesterly of the waterfall/of me”. This system is permanent at any time of the year and speakers even use it when the respective winds do not blow. In Kalaw Lagaw Ya, on the other hand, spoken in the central and western Torres Strait Islands in Queensland, the organization changes with the varying winds.

Even though the MalakMalak also live on a big river like the Jaminjung, they have not developed a river-flow-based system. The Daly River is partially tidal in the tribe’s traditional territory and therefore does not easily lend itself to either a downstream/upstream nor a tidal system as the one in Bardi (below).

It is not surprising that a language such as Iwaidja in example (2d) spoken on Croker Island 200km off the coast of the Northern Territory has a directional system based on the topography of the island that refers to ocean-wards and inland. This system is not static and relies entirely on your location on the island. In this sense, it is similar to Jaminjung’s depending on which direction the river flows at the location of speaking and Kaga Lagaw Ya’s altering wind-system. This organization can become ambiguous when speakers are located right in the center of the island. In that case, they might resort to pointing and gesturing in addition to naming directions.

In Bardi spoken in One Arm Point in Western Australia, there is a system based on incoming and outgoing tides as in (2e). This, of course, changes every six hours! Since the community has long depended on an intimate knowledge of the tides for travel, hunting and gathering, it is not surprising that such a system developed.

Some languages in Australia (very few) use neither absolute nor relative frame of reference. This is the case in Murrinh-Patha spoken in Wadeye (Port Keats) in the Northern Territory. Here, speakers use place names, demonstratives (there, that) as in (2f) and pointing to talk about space and directions. Living non-nomadically in small tight-knit communities where people know their surroundings inside out, the Murrinh-Patha use this system very confidently and unambiguously.

The point of departure

So where is Doro? Well, I think I’ve made my point in saying – it really depends on where and who YOU are. New perspectives, attitudes, languages and backgrounds shape us. They can open our eyes to fresh experiences at any moment. There are always different ways to view the world, even where we don’t expect it.